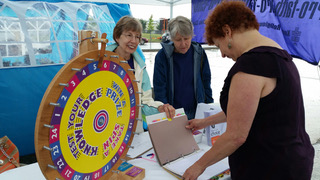 It’s state fair season, and the promise of music, ferris wheels, farm animals and food always draws big crowds to the Kentucky State Fair in Louisville. These crowds in turn draw Kentucky Religious Coalition for Reproductive Choice to the fairgrounds. At our information table at the fair, we’ve found a fun and easy way to connect with and educate new supporters in our state.

Since 2015, we’ve replaced petition-signing at our state fair information table with something lighter —  a game we’ve created that tests visitors’ knowledge of reproductive health.

The spinning wheel of reproductive health, as we call it, invites all to “take a spin, test your knowledge and win a prize.” This brightly colored, handmade wheel has helped us attract people with a wider range of views to our table. Their conversations with us help them see beyond the common presumption that religious people must be anti-choice.

How the Game Works Each spin of the wheel lands on a number, and each number corresponds to a question we keep in a corresponding binder. Adults get questions on reproductive issues such as “What percentage of United States abortion patients are already mothers?” or a multiple choice challenge about the percentage of women of faith who seek abortions.

Kids who spin the wheel are given an entirely different set of simple questions not related to reproductive issues.  It might be “What is the capital of Kentucky?’ or “What color was Mary’s lamb?”

Whether they answer right or wrong, every player wins a prize. Adults like their prize — a paper fan imprinted with the message “I’m a fan of reproductive freedom” which can potentially carry the concept more widely among the fairgoers. Children, of course, are delighted when they win their reward, a piece of candy.

For KRCRC, the big win is widening knowledge on our issues, signing up new supporters and even getting some cash in our donation jar.  We’ll be running this game and information table all 11 days of this summer’s fair Aug.17 – 27.

The spinning wheel has worked well for us not just at the fair, but also at other open-air sites that draw large crowds. Volunteers have brought our spinning wheel to the Flea off Market in Louisville with its vendors, food trucks, craft beer and family entertainment.

We’ve appeared at the NuLu Festival, a street festival in an urban neighborhood that’s become known for its historic preservation, environmentalism, art galleries, shops and restaurants.

And we’ve taken our spinning wheel to health fairs given by Planned Parenthood and by Lexington National Organization for Women.

We’re very happy with this form of outreach and recommend it to other RCRC grassroots groups.

What ideas have worked well for your group in connecting with new people in your state or city? We’d love to learn from your experiences, too.