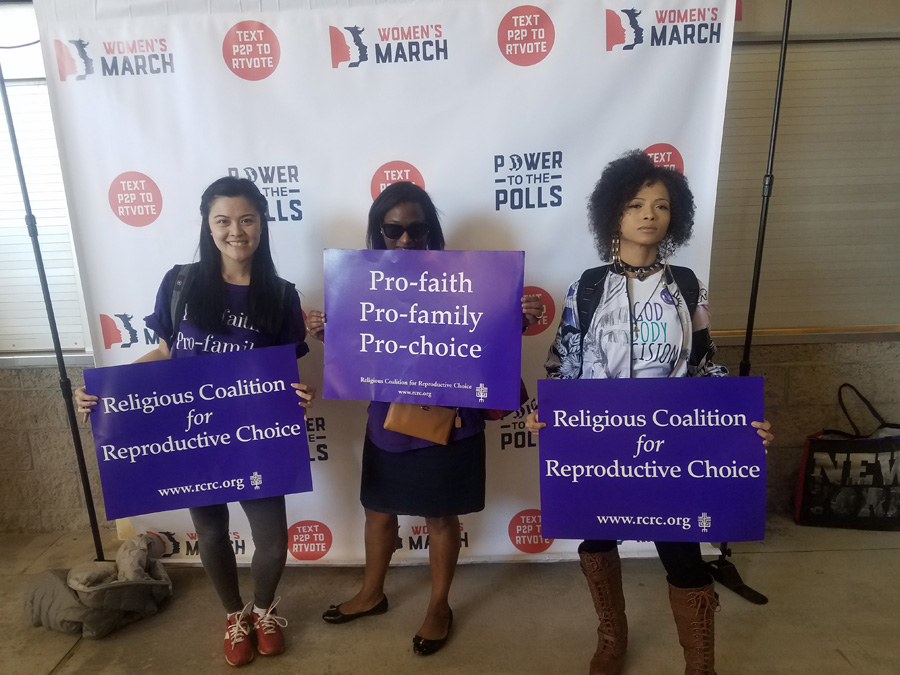 Chauna Lawson, right, with RCRC colleagues at the Women’s March in Las Vegas in January 2018.

I am a young black woman, one of the children of Chocolate City, as Washington has been called because of the many black residents who for decades fueled the city’s economy. Keeping up our family’s home in an urban neighborhood was far too expensive, schools were in bad shape, and the city offered fewer options for its residents at the time.

When my family left for the surrounding Maryland counties, I quickly noticed the contrast in resources between the public schools in the suburbs and the ones I’d attended in D.C.  This was an early, first-hand introduction to disparities based on geography and race.  As I’ve become an adult, I’ve become aware of other inequities I face as a woman, and particularly a black woman.

The Concept of Intersectionality

Intersectionality highlights the very specific set of challenges faced by black women and others in groups marginalized based on race, class, ethnicity, sexual orientation, disability and other identities. The term intersectionality originated with the legal scholar and racial theorist KimberléCrenshaw, who coined it in 1989 to explain the complexity of prejudice based on a combination of identities surrounding an individual, group, or social problem.It’s about what you do, not what you preach

Crenshaw’s term was inspired by the 1976 class action lawsuit, Degraffenreid v. General Motors Assembly Division. In that case, the courts determined that black women could only sue for discrimination based on race or based on sex – but not both.  They didn’t understand that bias can affect an individual or group on multiple, intersectional levels.

As a black woman, I feel an enormous amount of pressure to show respect for intersectionality in the way I live my life.  I sense a constant tug of two overwhelming narratives that both diminish black women – patriarchy in the black community and exclusion of black women in the feminist establishment. Inspiring all people to embrace an intersectional perspective is a goal for me. That’s why I’ve become an activist.

In college I volunteered on spring breaks as a relief volunteer after Hurricane Katrina. I created opportunities for other students at my alma mater to take similar service trips. I’ve held leadership positions in Delta Sigma Theta Sorority, Incorporated, a leading black women’s service organization.  And my job here at the Religious Coalition for Reproductive Choice includes opportunities to promote interfaith views on reproductive health, rights and justice by speaking, writing, and demonstrating.

It’s About What You Do

Here’s what’s ultimately most important – and least understood — about intersectionality:  It’s more about what you do than what you preach. It’s crucial for white allies use their privilege to center the most marginalized and to call out hatred and oppression when they see it. This is how we will root out misogynist ideas about black women that all too often come from people of all races.

It takes going outside of your comfort zone to confront the very real cultural norms and daily practices that disenfranchise and marginalize black women. It takes stepping outside your box prepared to listen rather than speak. It takes speaking up on behalf of marginalized groups, and asking why they are not at the table. It requires including us in creating solutions, not just expecting us to support solutions devised for us by others.

Intersectionality is at the core of reproductive justice and black feminist thought. Until it is both respected and practiced at the heart of every social justice movement, we cannot effect the change our world so badly needs.

Chauna Lawson, a member of RCRC’s staff, fills many roles including supporting our programs, communicating our advocacy messages and planning logistics.