If you’re a member of the media and would like to speak with us, please get in touch!

A Texas minister helps fly dozens of women to New Mexico every month to get abortions. He’s one of many religious leaders working on coordinating abortion care if Roe v. Wade is overturned.
May 28, 2022

Meet the Religious Groups Fighting to Save Abortion Access
May 25, 2022

History shows that the First Amendment should protect abortion
May 12, 2022

How The Elimination of Legal Abortion Could Impact Teens
May 7, 2022

Religious groups take up the fight to preserve abortion rights
May 5, 2022

Fetal Personhood: Another Big Lie From the Christian Right
January 28, 2022

An ancient mistranslation is now helping to threaten abortion rights

Op-ed with NCJW’s Rabbi Danya Ruttenberg on a mistranslated verse from the Book of Exodus and its role in shaping anti-choice theology
October 12, 2021

The real question is: Who benefits from Texas’ new abortion law?

Op-ed by RCRC Board Member Asha Danya on the harm that SB 8 and similar bans visit upon mothers and children
September 4, 2021

We Can’t Have Religious Freedom Without Reproductive Freedom

Denying Abortion Coverage Is Not a Religious Value

RCRC, the National Council of Jewish Women, and Catholics for Choice assert that people of faith support choice, and call on Congress to end the Hyde Amendment in this joint op-ed.
August 17, 2020

Op-ed by Rev. Katey Zeh, examining the contradiction between religious conservatives’ response to stay-at-home orders and their anti-choice stances.
June 2, 2020 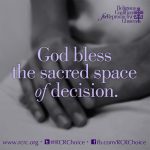 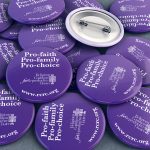 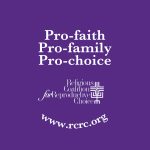 The Religious Coalition for Reproductive Choice is a broad-based, national, interfaith movement that brings the moral force of religion to protect and advance reproductive health, choice, rights and justice through education, prophetic witness, pastoral presence and advocacy. RCRC values and promotes religious liberty which upholds the human and constitutional rights of all people to exercise their conscience to make their own reproductive health decisions without shame and stigma. RCRC challenges systems of oppression and seeks to remove the multiple barriers that impede individuals, especially those in marginalized communities in accessing comprehensive reproductive health care with respect and dignity.

For more than 40 years, the Religious Coalition for Reproductive Choice (RCRC) has been the sole organization bringing interfaith and multiracial voices to reproductive health, rights and justice issues.

Our member organizations represent diverse religions and theologies unified in preserving reproductive health, rights and justice as a basic principle of religious liberty and diversity.

RCRC as it exists today evolved from an underground network of ministers and rabbis called the Clergy Consultation Service (CCS), formed in 1967, six years before the Roe v. Wade Supreme Court decision legalized abortion in the United States.

In response to the deaths and injuries of women caused by unsafe abortions, this group quietly referred women to abortion providers they had researched and found to be safe. Within one year, CCS drew 1,400 members nationwide.

Many of the clergy involved had also been active in the Civil Rights Movement. They actively connected their racial justice activism to their commitment to helping women and families gain access to safe abortions.

After the 1973 Roe decision, a new group grew out of CCS. This new group, the Religious Coalition for Abortion Rights (RCAR), existed to safeguard the newly won constitutional right to privacy in abortion decisions.

In 1989 Patricia Tyson, director of RCAR, signed on to the “We Remember” statement organized by Donna Brazile, then executive director of the National Political Congress of Black Women. The statement expressed Black women’s deep opposition to public policies controlling their reproductive lives, policies rooted in the oppression of black women since the days of slavery.

In 1990, RCAR co-sponsored a meeting of more than 30 Native American women representing more than 11 nations from the northern plains. The Agenda for Native Women’s Reproductive Rights was forged at that meeting.

Women of color have taken many important roles in the history of this organization which recognizes that restrictions on reproductive freedom disproportionately target poor women and women of color across our spiritual and faith traditions.

When the “We Remember” brochure was republished in 1994, three women of color, all in leadership at both RCRC and WCPP — Rev. Alma Faith Crawford, Mary Jane Patterson and Beverly Hunter — signed on to it.

In 1993, RCAR broadened its mission to include related issues of reproductive health and justice. The reproductive justice movement sees intersectional challenges to women’s reproductive lives. It recognizes power inequities inherent in our society’s institutions, environment, economics and culture.

We stand in solidarity with the reproductive justice movement and a broad based human rights agenda that focuses on the most marginalized among us. RCRC endorses public policies that ensure the medical, economic and educational resources necessary for healthy families and communities equipped to nurture children in healthy, safe environments.

In 1994, RCAR renamed itself the Religious Coalition for Reproductive Choice, reflecting the diversity of faith traditions the organization represents.

Since then, controversies over issues of sex, sexuality, reproductive health and reproductive freedom have grown and intensified. RCRC’s activities have expanded in response.

What We Stand For

Beliefs about compassion and love central to all faiths motivate RCRC to advocate for reproductive freedom.

We support every person’s right to self-determination over their own bodies and reproductive lives. We also support access to sex education, family planning and contraception; affordable child care and health care; adoption services; adequate reproductive and general health care services and adequate insurance coverage for these services.

Based on our religious beliefs and our commitment to reproductive justice, we also champion a range of issues that impact families, family formation and the health and well being of communities. This means that our work deeply recognizes the ways in which reproductive justice links to LGBTQ issues, immigration, environmental, racial and economic justice.

Our Record of Advocacy Action

Over the years, RCRC has expressed the views of denominations of Christians, Jews, Muslims and others nationally and through grassroots state affiliates. Our activities have included:

Our History of Educational and Pastoral Outreach

RCRC has also worked to unite pastors and theologians to break the stigma of abortion and the silence about sex and sexuality in religious communities. Among our achievements are:

Today, RCRC’s members represent a range of Christian and Jewish denominations. Together we are finding new ways to bring faith-based views into public debate that has been dominated by the religious right.

Religious and political climate of reproductive issues in the South

Reproductive issues in communities of color

Relationship between science or medicine and reproductive justice

Faith and spirituality among Millennials

You can access our embargoed press materials page by following this link.

Safe, legal abortion services, regardless of income or circumstance

Safe, legal abortion services, regardless of income or circumstance