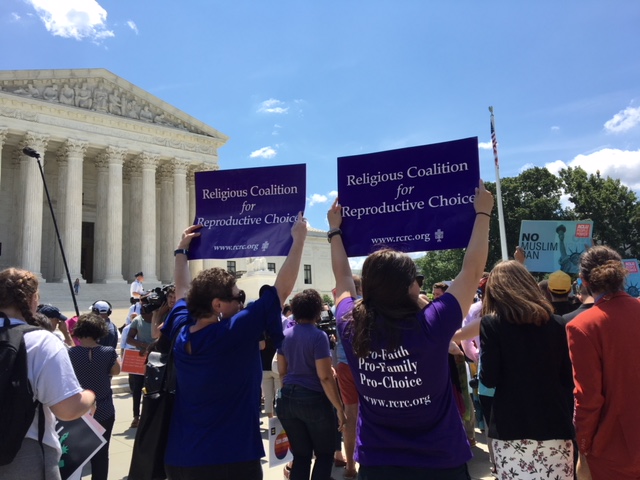 The U.S. Supreme Court has just ruled in favor of the free speech of California crisis pregnancy centers (CPCs) which exist to dissuade pregnant women from seeking abortions. The ruling sends the matter back to lower courts. The likely result: CPCs, rooted in conservative Christian values, will be allowed not to disclose to pregnant women the availability of abortion services.

RCRC believes a woman deciding whether to carry her pregnancy to term deserves full, accurate and unbiased information about all of her options, including abortion. We joined hundreds of protesters outside the Supreme Court immediately following the decision.

However, over 2,500 centers operate across the U.S. using a range of deceptive practices.

Here’s an overview of the case, NIFLA vs. Becerra.

What Do CPCs Do?

At CPCs, untrained staff who appear to be medical professionals often provide women with incorrect information. Deliberately creating confusion, these centers locate very close to reproductive health clinics that provide abortions. Even their names suggest they offer similar services. In Jackson, Miss., for instance, a CPC called The Center for Pregnancy Choices opened only 100 yards from Jackson Women’s Health Organization, the state’s only abortion clinic.

During an investigation in California, CPCs were found to be using intentionally deceptive advertising and counseling practices. For example, CPCs are incorrectly claiming that abortion leads to suicide, depression, infertility and/or breast cancer.

What’s the Case About?

According to NPR, the case revolved around women’s right to know vs. the CPCs’ right to free speech. The National Institute for Family and Life Advocates (NIFLA) had sued the state of California over the state’s Reproductive FACT Act.

The law was designed to protect women against CPCs’ misleading practices. It required CPCs to provide information about the availability of free or low-cost abortion, contraception and prenatal care to low-income women through public programs. CPCs also had to provide contact information for these services.

In addition, the law required unlicensed clinics to disclose in their advertising and in their facilities that they are not licensed by the state to provide medical care, only advice about pregnancy.

What Happened in the Supreme Court?

Other federal courts in Texas, Maryland, Hawaii and Illinois have struck down similar laws, ruling that government can find other ways to inform women about their options that does not violate CPCs’ freedom of speech.

RCRC supports women making independent decisions according to their own conscience and has helped them in making those choices, always considering all options. We respect women’s God-given capability and right to control their lives. They need full, accurate, and unbiased information to do so.

To learn more about these issues, read these articles:

A woman’s story of misleading, incorrect and shameful information from a CPC. Think Progress

From the perspective of health professionals, we need to fight CPCs now. The Hill